Matthew Dunn is a former MI6 Agent who recruited and ran agents for British intelligence. As an agent he successfully executed approximately 70 missions. It is well known that MI6 does not award medals, however Dunn “was the recipient of a very rare personal accommodation from the secretary of state for foreign and commonwealth affairs for work he did on one mission, which was deemed so significant that it directly influenced the successful conclusion of a major international incident.” (Biographical information published by the author)

It is Mr. Dunn’s background which convinced me to read his debut novel, Spycatcher

, which introduces the world to a new intelligence hero Will Cothrane. Our hero is damaged goods haunted by the death of his father in whose footsteps he followed as an agent for MI6. Cothrane is no ordinary agent, within MI6 he is deemed Spartan, a term reserved for a lone super agent so secret that only his handler knows his identity or if he really exist.

When American intelligence stumbles upon evidence of a major terrorists attack, Britain and the United States must race to save the lives of the potential victims. However, the mastermind behind the terrorist threat, Iranian intelligence officer Megiddo, knows his plot has been compromised and begins feeding misinformation through the same channels. Western intelligence realizes they are being deliberately misled however due diligence demands they follow up on any suspected threats, leaving only Will and 4 brave American operatives to thwart the attack.

Along the way Will meets Lana, a jilted former love interest of the great Megiddo whose anger drives her to help Will find the Iranian terrorist despite placing herself in grave personal danger. Will however finds an emotional side of himself long ago forgotten, which compromises his objectivity in seeking his prey. Along the way he learns the gruesome truth behind his father’s death and that the very mad man he seeks is his father’s torturer and murderer.

is action packed and fast paced; think Vince Flynn meets John Le Carre. The climatic battle scenes are chronicled in vivid and explicit detail allowing the reader to imagine the action taking place. But this is a spy thriller and nothing is as it seems, the final climatic twist is revealed at the last possible moment. I guarantee you’ll close this novel and think, ‘wow, I didn’t see that coming.’ Spycatcher

is an instant classic within the spy thriller genre. 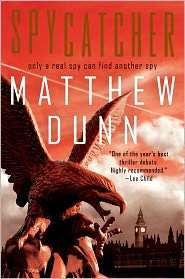 Get our free newsletter